A scale is a group of adjacent notes, played one after the other. A great sounding scale also comes from "thirds", dazzling music passages are sometimes just part of a thirds scale. So we learn it.

We begin by defining a third. It is the "interval" between two scale notes, which have a single note between them. So, the interval between the 1 and 3 scale notes is a third, the 2 and 4 scale notes another third, 3 and 5 another and so on. Listen to the 1 and 3 note played together

Now the 2 and 4 note played together

The interval between each pair of notes is a third, however they sound different. The first example, the 1 and 3 is a "major third". The second one, the 2 and 4 is a "minor third". Notice how the minor third has a sad and wistful sound, the major third a brighter sound.

Now we play a scale of thirds, like this

This time the score is

Practise these scales until they are perfect. You may need to slow down, quite a lot (students often find this hard). Persist until you find a speed where there are no mistakes.

Now increase the speed gradually, notice where you stumble. Almost certainly, it will be on the 5 7, 6 1 part of the scale. Here the breathing pattern changes, from blow blow, draw draw to blow draw, draw blow. This breathing change has confounded generations of harmonica players, both tremolo and 10 hole.

This time the score is

Now try the thirds scale over two octaves, up and down, like this 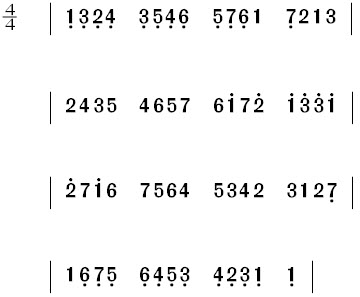 Finally, try the exercise with this backing

The thirds scale is actually two scales played at once. Listen to the exercises, you should hear this. Then look for scales of thirds, or scale parts in the music around you. They are everywhere, and will appear in your music. Be ready for them.