Since sixteen year old Christian Buschmann invented the modern harmonica in 1821, harmonica players have been using effects to enhance and add color to their tone. Tongue blocking, articulation and hand cupping were there in the beginning and are still at the heart of harmonica playing today. In this article we will consider the role electronics has played in effects for the harmonica player and guidelines on choosing devices. It is important to remember that great amplified tone begins with great acoustic tone. Even the best harp amplifiers, effect pedals and microphones cannot improve bad acoustic tone, they only add effect and make it louder. So don’t neglect your acoustic tone, it comes first.

Harmonicas do not produce much volume so when vacuum tube amplifiers first hit the music scene it was not long before harmonica players were playing into microphones connected to amplifiers and were able to be heard better than ever before. What happened next? It is my guess that the guitar players turned their amps up and got louder. Now with the guitar players playing as loud as they could (imagine that, LOL) the harp player had to get closer and closer and eventually he had to cup his hands around the microphone to still be heard. With the microphone removed from the stand and cupped in his hands the harp player found what was to become the Holy Grail of harp effect; harp played into a tightly cupped microphone plugged into a vacuum tube guitar amplifier turned up as far as possible and distorting. People stood up and took notice, what a great new sound. Little Walter is generally credited with being the first to use this effect; maybe he was, who knows? One thing is for sure, Little Walter made it popular, so popular in fact that now, 50 years or so later we are still seeking that sound. This sound, this effect, has grown to define blues harp, an entire genre of music.

Now here we are in the 21st century and not much has changed. Why? Probably because harp players have never been taken very seriously by producers of musical equipment, i.e. microphones, amplifiers, and effect pedals. Not to mention that Little Walter left such an impact that most players since have never looked beyond his sound and style of play. Little Walter didn’t need it so why should I? Many players have spent a lifetime trying to recapture the past, not that this is bad because millions love the sound of amplified harp. I, for one, am glad there have been those who have carried on this tradition.

But, what if the blues greats of the past had products made specifically for them, the blues harp player. Would any of them have used an amplifier designed specifically for the harp player and not a guitar player; an amplifier with less feedback, more usable volume and a fat overdriven tone? An example of a great harp amp is the Harpgear amp produced by Brian Purdy. Would they have used a Harmonica Honker microphone or a Blowsmeaway Productions microphone? What about a Lone Wolf Blues Co. delay pedal, octave pedal or a tube distortion pedal designed for harp players by yours truly; Randall Landry? The Holmes Harp Commander? What do you think? Besides these offerings you can find custom accessories by Cumberland Cases. I believe that all musicians share one thing in common and that is the desire to sound as good as possible, the quest for the ultimate tone, it is that way today and I believe it was that way in the days of Little Walter. Fortunately; the harmonica players are now seeing a day where they actually have options; equipment that is being designed specifically for them, the modern harp player.

There are many factors that go into equipment designed for harp and it starts at the microphone. This information is intended to help harp players choose the effect equipment that will work best for their unique application and highlight the differences with equipment designed for guitar. Hopefully it will bring you one step closer in the quest for the ultimate tone. 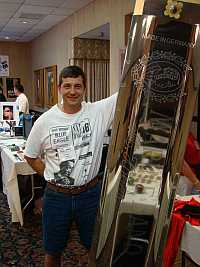 My name is Randall Landry, owner of Lone Wolf Blues Company. I began my electronic career in 1978 studying vacuum tubes and transistors in trade school. I have worked 26 years in the communications (electronics) industry and I am currently employed as a refinery operator. I began learning harp a few years back and as is the natural progression it led to tube amps; being an electronic technician I decided to build my own and when I decided I wanted a delay pedal well I built one of them also, I now offer a complete line of harp effect pedals that are available to the blues harp community at www.lonewolfblues.com